Required cookies are essential to let you move around the website and use its features, such as accessing secure areas, shopping baskets and online billing. These cookies allow our website to provide services at your request.

Functionality cookies are used to remember the choices you make, e.g. your user name, log in details and language preferences. They also remember any customisations you make to the website to give you enhanced, more personal features.

Targeting cookies collect information about your browsing habits to deliver adverts which are more relevant to you and your interests. They also measure the effectiveness of advertising campaigns.

This site uses cookies and related technologies for site operation, analytics and third party advertising purposes as described in our Privacy and Data Processing Policy. You may choose to consent to our use of these technologies, or further manage your preferences. To opt-out of sharing with third parties information related to these technologies, select "Manage Settings" or submit a Do Not Sell My Personal Information request.

Since 1917 noticeable milestones were the market leading ZA-U model, Amazones first twin disc machine introduced in 1980 followed by ZA-M in 1989 which reigned as number one until its replacement in 2013 with the ZA-TS for high output and wide spreading widths and the ZAV in 2015.

Today the ZAV mounted spreader is available in hopper capacities from 1,400 to 4,200 l and it impresses with its high operational speeds of up to 30 km/h. Thanks to a high spreading capacity of up to 390 kg/min and working widths of up to 36 m, exceptionally high acreage outputs are achieved.

ISOBUS communication, weighing system, the hydraulic or electric Limiter V or V+ border spreading systems plus the many other optional extras make the ZA-V one of the most modern fertiliser spreaders in its class.

The ZA-TS mounted spreaders and ZG-TS trailed spreaders are available in hopper capacities from 1,400 to 8,200 l and are both equipped with the new TS spreading unit. The TS spreading unit is designed for working widths of up to 54 m and, at the same time, offers particularly excellent border spread patterns. This makes the ISOBUS ZA-TS and ZG-TS the highest performing of spreaders.

The accurate weighing system, the precise AutoTS and ClickTS border spreading systems, the comfortable Argus Twin technology, as well as the many other additional options, make these fertiliser spreaders possibly the most modern in their class.

When it comes to electronics Amazone are in a league of their own, with a myriad of options to suit modern farming practices and Precision Farming programmes. These electronic systems have become an important part of intelligent crop production, allow considerable savings of assets and help to improve the exploitation of yield potentials. At the same time they save the environment.

Full ISO integration means that these functions can be simply accessed using the control panel in the tractor without the need of a machine specific control box. 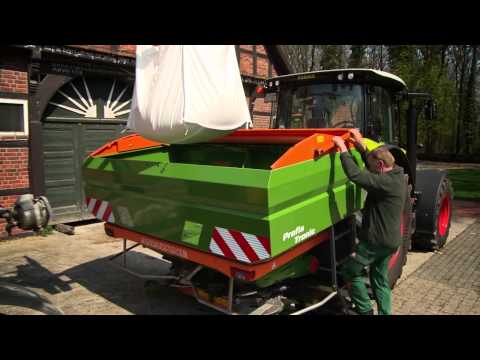